Here is a version with the word 'color' instead of 'colour'. 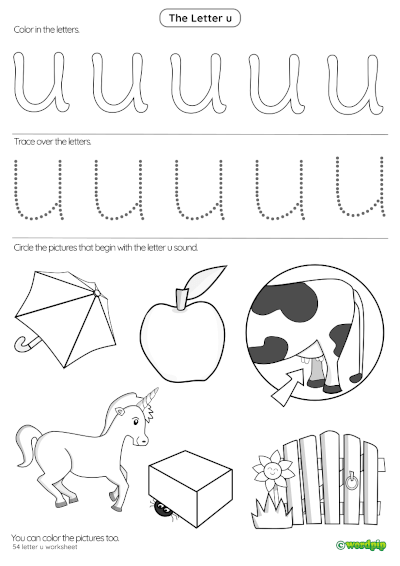 This is an A4 size worksheet for the letter u.
It is for the lower case u.

Designed to aid children in learning to read
by helping them to recognise the letter sounds
with the aim to eventually blend lots of them together to make words.
This will aid in the early development of reading and writing.

This simple worksheet can help reinforce verbal lessons that have been taught previously.
One example of a verbal lesson is playing 'I spy' with the letter u.

This worksheet has a drawing of an ubrella, apple, udder, uicorn, a spider under a box, and a gate.
It is black and white to save on coloured ink.
It's a free printable download.
It is good for printing out and colouring in too.
It will help familiarise the letter u and how to write it.

It helps to introduce the phoneme and grapheme t.
A phoneme is a sound that the letter or groups of letters make.
The grapheme is the written letter.
For example the letter 'u' in this worksheet.

Umbrella, udder, and under are examples
of the a phoneme at the beginning of the word.

Unicorn is an example of a long u 'ew' sound.

There is a version with the word 'colour' replaced
with the American spelling of 'color'.

More practice with the letter u.
Find the lower case letter u worksheet.
Find all the letter u's
Fun bonus - Can you spot the hidden boy? 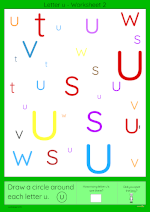 Next in the series of lowercase letter worksheets
a free printable pdf worksheet for the letter v. 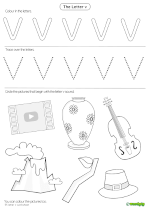 Checkout the previous worksheet in the series
of lowercase letter worksheets
a free printable pdf worksheet for the letter t. 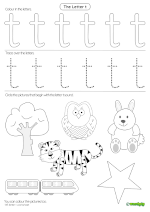 A matching game
using the letters
s,a,t,p,i and n

Why satpin?.
This useful combination of letters,
is taught in early phonics,
as they produce many cvc words
(cvc is consonant vowel consonant)
such as sat, pin, pat, tin, tap. 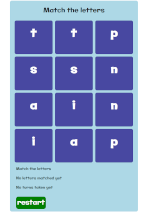 A letter a video

A short approx 2 minute 30 video on YouTube
with examples of words that begin with the letter a.